In this article, we are going to get derive Euler’s equation of motion along a streamline and from that, we will derive Bernoulli’s equation. So, let’s dive into it. Consider streamflow of incompressible non-viscous fluid and the cylindrical element of fluid with cross-sectional area δA and length δS moving along streamline as shown in the above figure.

Let V be the velocity and “as” be the acceleration,

Weight of element γδAδS is acting through the center of gravity in a vertically downward direction.

divide the above equation by δAδS,

Divide the above equation by ρ and we get

This is the final Euler’s equation of motion.

Let a small cylindrical fluid element in a stream tube be having a cross-sectional area ‘dA’ such that its weight ‘W’ makes an angle of θ with the axis of the element.

Let the length of the element be ‘ds’ and pressure at upstream and downstream faces be P and (p + dp/ds . ds) respectively.

From certain datum, let elevation difference between circular faces of the element be ‘dz’.

For steady flow, acceleration of fluid is given as,

Also, the mass and weight of fluid elements are given as ρdAds and ρgdAds respectively.

Apply Newton’s second law of motion to the above equation,

Above equation can also be written as,

The above equation is known as Euler’s equation.

Now let’s get a derivation of Bernoulli’s equation from Euler’s equation.

For an incompressible fluid, ρ is constant. 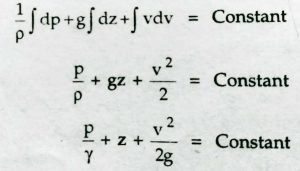 This is the required form of Bernoulli’s equation or energy equation, where each term represents the energy head means energy per unit weight of the fluid.

Following assumptions are made in the derivation of Bernoulli’s equation: